The street art in Athens: The most famous Greek street artists and the areas to explore! 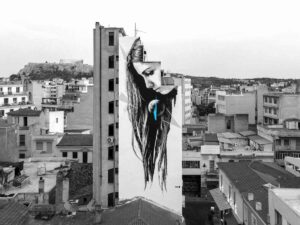 If you visit Athens for the first time ever, the first thing that you will notice -a part from the Acropolis- is the street art. The graffiti in Athens is everywhere, from the city center to the small local neighborhoods. Actually, many visitors think that it is legal because it is so spread out. Well, believe it or not, street art is illegal in Greece and us Athenians we have just learned to get along with it.

You can find all sorts of street art in Athens. Beautiful murals made by professional Greek street artists that can really blow your mind away, but also awful tagging that can get really close to vandalism. Keep in mind that the street art in Athens has no connection to serious crime and gangs, like other places on earth.

The thematology of the street art in Athens has a wide range of topics, from politics and economy, to Greek mythology and history! An interesting question here is if the Athenians like their city spayed so much? Honestly, that is a hard one to answer, but I think that the majority of the people just don’t care and just got used to it. Actually, this is the main reason that the amount of works is so vast and keeps on growing. 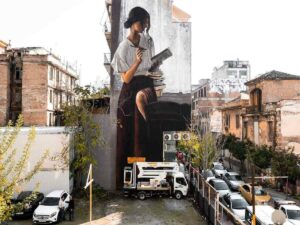 THE MOST FAMOUS GREEK STREET ARTISTS:

The Athenian street-art scene is actually a multinational team of hundreds of people, with various backgrounds. Some are self-taught, others hold a degree in Fine Arts, some are rich, some are poor, and some can even be homeless. I give you here a list of just some of the most important Greek street artists that are based in Athens. You can click on the name for more information on each one of them. INO, Wild Draw­ing (WD), ACHILLES , SONKE, Vasilis Gryparis, WOOZY

THE HIDDEN NEIGHBORHOODS TO ADMIRE AMAZING STREET ART IN ATHENS!

Psirri: Your street art tour can start from downtown Athens, in the neighborhood of Psirri. Psirri is the heart of the tentious nightlife in Athens, just 5 minutes away from the Monastiraki metro station. It is a small village-looking neighborhood full of restaurants, bars and street art. In the past it used to be a poor, low class neighborhood with a rough reputation. There was nothing turisty about it until the 1990’s when out of the sudden many bars started pumping up. Nowadays, it is the definition of nightlife for the Athenians, full of stylish bars and restaurants that are open all day! Beyond the nightlife, you can visit Evripidou street, full of the spice and herb shops and Varvakios Central Meat and Fish Market. Psirri is the epitome of the alternative Athens, as it is one of the most heavily-painted neighborhoods with graffiti in Athens! 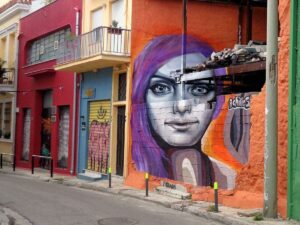 Metaxourgio: If you are looking for the most uprising/hipster side of alternative Athens, then Metaxourgio is your destination. There is so much controversy nowadays, as you can see brothels, immigrant shops, luxurious apartments, expensive restaurants and lower class flats one next to the other, creating a unique mosaic of different people living in a neighborhood. Even the President of the Greek Republic has her house here! Street art of course is dominant in the area with great examples including some of the most significant murals and graffiti in Athens! 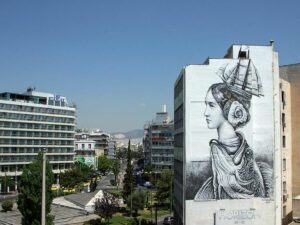 KeramikosKeramikos neighborhood is an area that is spread around the old gas factory (Gazi) of Athens. The industrial side of the neighborhood is present until nowadays, as many factories and car repair shops still operate in the area. Since the late 2000’s is the center of the extreme nightclubbing for youngsters but also a meeting place for the LGBTQ+ community, a different side of alternative Athens. Every single wall pretty much is covered with some of the finest examples of graffiti in Athens. The premises of the old gas factory have been used for many different events and concerts that you can check on their official website.

Exarchia: This is a neighborhood downtown with a strong connection to the leftish and anarchist movements in Greece, that even nowadays is considered to be a ghetto for the police. But, do not let the reputation keep you away from visiting it. It is a very pretty part of the city that many students hang out at, because of its proximity to the main universities in Athens. There are dozens of bars and restaurants that offer great quality food and drinks and there you will see some of the heaviest painted with graffiti in Athens walls.

Anafiotika : This is probably the most unique neighborhood you will visit in Athens. It is considered to be a secret gem of the town. The small 45-housed neighborhood is basically a greek island-looking settlement, with white and blue houses, just like the ones in the famous islands of Santorini and Mykonos. The whole neighborhood was constructed back in the 19th century by immigrants from the Greek island of Anafi in the exact same style as their villages on the island. Even here, well-curated street art is present, adding a special touch to the beauty of the place!

THE BEST WAY TO EXPLORE STREET ART IN ATHENS! 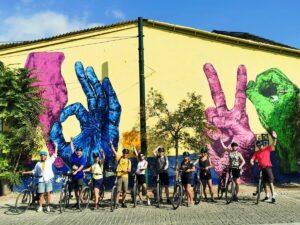 One of the best way to explore the alternative Athens is by booking a bike tour with Athens by bike tour company. Athens is a big city of 5-million citizens and the distances from one neighborhood to the other can be really long. Their awesome bike tours always include some street art tour stops in the itinerary. A city bike tour is the best way of sightseeing in order to explore all the interesting neighborhoods in a fast and funny way and you will get all the local knowledge from the experienced tour leaders. If you are a big fan of street art you can always ask for a private street art tour in Athens by bike!

Summer 2021: We are back in business Previous Article What’s best: bike tour or bike rental? Next Article

Our new location is official!